Our Vision and Purpose

Huntington Steel & Supply Company will strive to be an ethical and model corporate citizen, dedicated to understanding the needs of our customers and satisfying those needs with quality products and services by training and developing our people.

The Huntington Steel team will create a culture that is focused on the development of relationships, in a family business setting, that are mutually beneficial to all thus ensuring our long-term survival through the profitability of our customers, our vendors, our employees and our company. 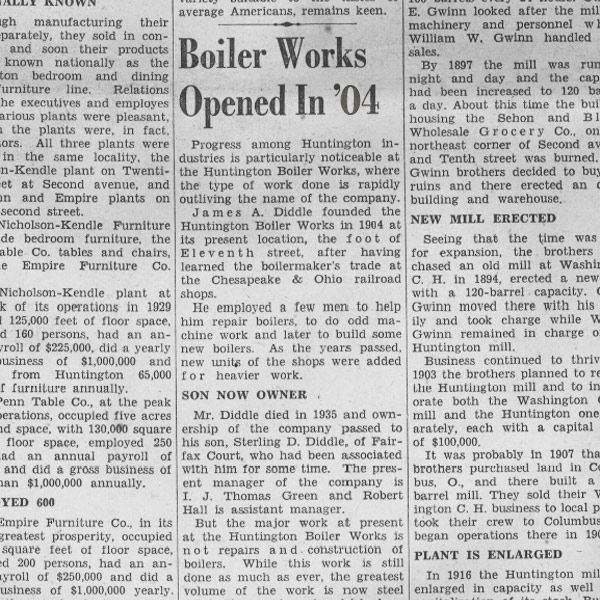 Huntington Steel & Supply was founded in 1904 by James A. Diddle in a shop located on 11th street along the banks of the Ohio River in Huntington, WV.

Originally founded as Huntington Boiler Works, Diddle had no vision for the company to become a steel supply and fabrication center. Two years after the devastation of the Ohio River Flood of 1937, the decision was made to construct a flood wall in Huntington, forcing the company to move to its current location, 100 3rd Avenue, Huntington, WV.

Over the years, the company began to evolve into a plate, miscellaneous fabrication, and steel supply business. Prompted by steel demands being at an all-time high after World War II, the company changed its name to Huntington Steel & Supply in 1954.

After operating successfully in Huntington, WV for 74 years, the company opened its second location in Pikeville, KY, in 1978. When the fourth-generation President of the company, Sterling Hall, retired from the company, he handed the reins to his son-in-law, Mike Emerson.

Under Emerson, the company opened its third branch in 1995 in Westover, WV. Nine years later in 2004, Huntington Steel celebrated a century of service to the Greater Tristate Area.

Today, Huntington Steel & Supply continues to operate from these three locations and is led by Dan Emerson, a sixth-generation CEO, and Owner.

We are your neighbors and have been for over 100 years. Huntington Steel is a family business deeply rooted here in Huntington, WV since 1904. Help us see our great city prosper.

By choosing a local business you not only get real value and personal service but you strengthen the local economy which can even lower taxes. Not only do we employ local workers but we buy local as well. We use local printers, accountants, wholesalers, attorneys, etc.

We also give back to the community. We are big sponsors of the local YMCA and Universities. We sponsor local sports teams, donate to local charities and much more.

We use cookies on our website to give you the most relevant experience by remembering your preferences and repeat visits. By clicking “Accept”, you consent to the use of ALL the cookies.
Do not sell my personal information.
Cookie SettingsAccept
Manage consent

This website uses cookies to improve your experience while you navigate through the website. Out of these, the cookies that are categorized as necessary are stored on your browser as they are essential for the working of basic functionalities of the website. We also use third-party cookies that help us analyze and understand how you use this website. These cookies will be stored in your browser only with your consent. You also have the option to opt-out of these cookies. But opting out of some of these cookies may affect your browsing experience.
Necessary Always Enabled
Necessary cookies are absolutely essential for the website to function properly. These cookies ensure basic functionalities and security features of the website, anonymously.
Functional
Functional cookies help to perform certain functionalities like sharing the content of the website on social media platforms, collect feedbacks, and other third-party features.
Performance
Performance cookies are used to understand and analyze the key performance indexes of the website which helps in delivering a better user experience for the visitors.
Analytics
Analytical cookies are used to understand how visitors interact with the website. These cookies help provide information on metrics the number of visitors, bounce rate, traffic source, etc.
Advertisement
Advertisement cookies are used to provide visitors with relevant ads and marketing campaigns. These cookies track visitors across websites and collect information to provide customized ads.
Others
Other uncategorized cookies are those that are being analyzed and have not been classified into a category as yet.
SAVE & ACCEPT